Any chance we could get a section in the mobile PWA, similar to the Due tabs (Now / ASAP / Later), where we could save/pin a custom set of three (3) lists/permalinks/saved searches, for quick access and easy switching between frequently used items?

Alternately, the ability to swipe left/right between lists would be nice. Basically anything that would allow quick switching between lists (or a certain few lists) to get a quick overview. Yes, I know it’s only a few clicks now, but less clicks/taps is always better and more convenient.

Somewhat related, having the ‘Group by Tag’ for the main page in the PWA would be nice. I can appreciate the approach of sorting the lists by most recently updated, but I prefer my lists grouped by context (tag) and to always remain in the same, predictable location.

Thanks for your time!
-Ross

Thank you for your thoughts. As I understand, the problem is to have a quick access to some selected lists/views, correct?

Swipe suggestion is probably no-go, as we use swipe to close/reopen tasks.

For grouping by tag/starring lists on mobile - it definitely makes sense, probably the most relevant existing request is sort lists on mobile, please vote/watch.

Unfortunately, cannot give any promises or estimates, sorry.

Hi Kir,
Correct - My hope was to have a few frequently-accessed items in a spot that’s easy to get to from basically anywhere.

Here’s a rough mock-up of what I had in mind. 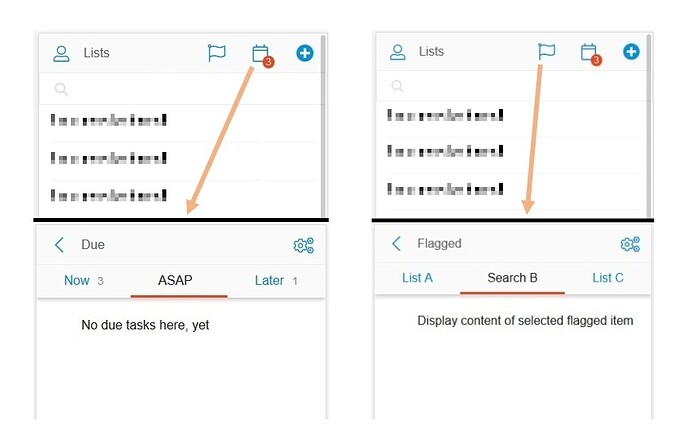 I’ll go add my vote to those existing requests.

Thanks a lot for your sketches - really appreciate your efforts

We will definitely consider them for our next mobile update, whenever it happens.

I’ll also put a link to this thread to the “Global search on mobile” ticket.

I would definitely use custom searches, especially on mobile!

I sort of solved one of my own requests, so here’s a workaround for swiping between different lists on mobile, in case it might help anyone else.

Open m.checkvist.com in your mobile browser of choice - one that allows swiping the address bar to flip between open tabs - navigate to one of the lists you want and then bookmark it. Open another tab and repeat the process for each list you want open. Then, if you want to swipe between tabs with different frequently-used checkvist lists in them, you can just open each of the bookmarks in new tabs.
(Note: opening the PWA from your homescreen won’t work for this you have to open it in a regular mobile browser tab)

Using the format below, you could also manually create the mobile bookmarks if you know the list ID number.
Example url for mobile bookmarks: https://m.checkvist.com/app/list/123456 (replace “123456” with your list ID to bookmark)