Hello, Its not really a bug, but when you filter task with priority 1, then alls task with P1 are shown, nice. BUT all parents with a “completed task” marked as P1 are shown too !

This isn’t logical. If the priority 1 task has been completed, I don’t need to get the parent of it displayed while filtering the list.

You can see, under the Parent SEO, I have no task marked has P1 to be completed (there is one, but already completed!) 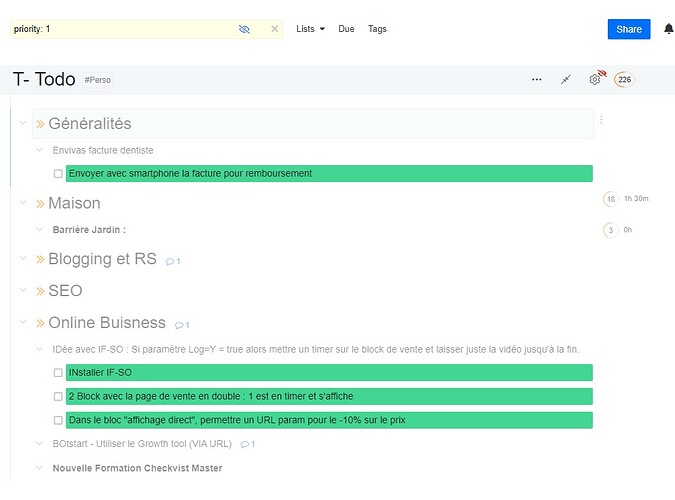 Hi, you can append in:open to filter text if you need only open tasks. Would it be OK for you?

Thanks for this solution. Even If to me, the most logical default behaviour would be to only shows open tasks.
If I quickly want to filter the list with priority, it is one more step to add “in:open” in addition to “Priority:1”

I will try to deal with it and create a Permalink with “priority:1 & in:open” als a Chromebookmark for a quick access

Sorry, I actually tested this :

And I still see the parents of the “priority 1”, completed tasks.

I am using it wrong ?

in: open priority: 1
And I still see the parents of the “priority 1”, completed tasks.

Hmm. Looks like this is a bug. Could you please check how it works on https://beta.checkvist.com - I hope I’ve fixed it.

I like the current behavior - I typically want to know the context for the item. I suppose one way to please us both would be to have an “sc” (show context) toggle like the one in the “due dates” screen.

Hello Charles, I think there is a misunderstanding : I agree to see the parents task of the “Filter Target” Task. That’s makes absolutely sense !

But I don’t really want to see the parents of a task that’s actually already completed. To me , completed Tasks or their parents, does not belong to standard display behaviour.

You’re right, I had misunderstood. It seems that if a priority task is completed it retains its priority, so shows up in the search. I typically use the “0” (zero) command before the space (complete) command to remove the priority, so it doesn’t show in searches.