A note on sorting

@Charles_Heckscher mentioned “sorting” in a different topic. It’s an important function for me, too, and I have two remarks. 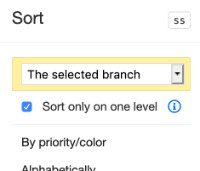 In the vast majority of cases, I just want to choose the sorting criterion. So I need to press at least two times Down. For me, the first order criterion would be a better initial focus location. As with wipe and reset, I mentally struggle with the context/scope selection.

Keyboard: For context selection, Left and Right should work without pressing Enter first. Maybe the sorting critera should have a shortcut, such that e. g., SS D would sort by date and SS P by priority.

Another context/scope that I use – but does not work with sorting – is a (consecutive) selection.

2. I am missing a way to reverse the sort order. First, I thought of an option for SS. Still, it could also be a separate operation or sorting criterion: revert the order the subitems, or of my (consecutive) selection – whatever the current order is.

Thanks for the description of your scenarios!

Here is a bunch of requests, let’s see.

So I need to press at least two times Down.

Fixed on beta.checkvist.com, thanks! Now we pre-select the first actionable item.

Keyboard: For context selection, Left and Right should work without pressing Enter first.

Right. Why did not we thought about it ourselves? Please check on beta.checkvist.com as well.

is a (consecutive) selection

This one as well as reverse order is not so easy to fix. Which sorting you’d usually like to use with the reverse order?

Thanks. (I don’t see the changes on beta yet.)

Oops. Forgot to restart beta after the update, probably due to recent migration worries (went well, btw, thanks).

Thanks for the clarification with the reverse order, will think about it.

I’ve added a ticket regarding the sorting order: https://checkvist.uservoice.com/forums/2121-checkvist-web/suggestions/42115597-add-an-option-to-reverse-sort-order-for-items

Just for the record, it is strange that nobody asked for this before.

Thanks. Indeed, it’s strange. For myself: If it’s a short list, I do it manually. For longer lists, I export, sort, import.

Strange. Haven’t been to uservoice for some time. I’m (not) seeing white text on white background (both in Chrome and Firefox). 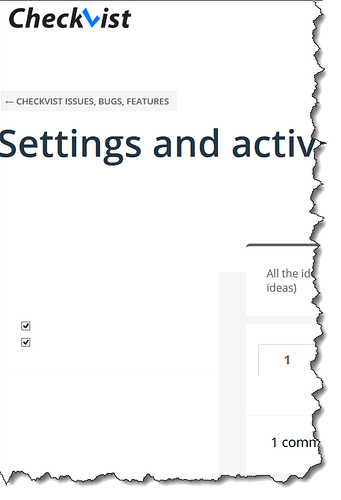 Thanks, @Ralf, looks like our colors scheme at Uservoice was indeed broken.
Should be fixed now (I hope)

Never visited the Settings page before, only Admin screens

Thanks so much for asking about this, @Ralf. That’s exactly how I use it.

Also I would love to see a direct shortcut to sort the current branch on due date.

Also, I’m a bit confused on how priority sorting works.

It appears that priority 9 has higher priority than no priority. This means that if I have a bunch of unprioritized tasks and I assign one a low priority, if I sort by priority it goes to the top of the list (I’d like it to go to the bottom).

I guess the workaround would be to assign all tasks a priority of 5, then I could assign high (1) and low priorities (9) and sort as I go along.

Additionally, it would be great if there was a shortcut to sort the entire list. If I have a nested task selected, I currently have to press too many keystrokes:

In Checkvist, items with no priority set are considered to have the least possible priority. I.e. by default, tasks are non-important. Maybe it does not quite fit your view but we probably won’t change that in a near future (

Talking about faster list sorting - so far I can figure out only an optimization when there is a way to select the type of sorting with a number. This would join the last two steps into one.

What do you think?
KIR

I understand. I can work around that. Although, I don’t think the esc + ss combination will ever feel natural. My fingers are in the home row and the Esc key is too far away, so I have to move my whole hand only to come back to the home row to press the s.

That would be fine. But for me, even better would be: